This page contains the opening portion of Chapter 12 from
Sustainable Superabundance: A universal transhumanist invitation 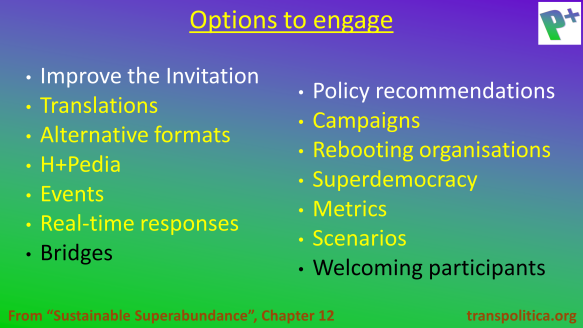 The forthcoming era of sustainable superabundance cannot be built by wishful thinking. Nor will the activity of heroic individuals be sufficient.

Instead, what needs to emerge is a network of communities that coordinates and magnifies the activities of an ever growing number of participants.

This final chapter of the Invitation highlights a number of tasks where participation is welcomed – tasks which can help accelerate the advent of sustainable superabundance.

To express interest in one or more of these tasks, follow the links on the main page of the Transpolitica website, https://transpolitica.org/. Everyone is invited.

To explore some of the topics from this Invitation at more length, see the publications referenced on the Transpolitica website, including the lead author’s previous book “Transcending Politics”, with its extensive set of references. See also H+Pedia, mentioned below.