This page contains the opening portion of Chapter 3 of RAFT 2035.

Goal 3 of RAFT 2035 is that automation will remove the need for anyone to earn money by working. 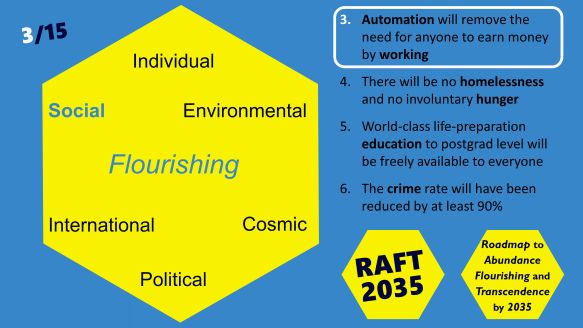 Sooner or later, increasingly powerful automation systems, including robotics and AI, will be able to take over an ever-growing number of work tasks from humans. This should be seen, not as a threat to the livelihood of employees, but as an opportunity for all of us to spend more time on matters of most interest to us. None of us should find ourselves spending time in labour that is back-breaking or soul-destroying, or in what we perceive as “bullshit jobs”.

The threat to employment from automation has long been foretold. Up till now, these predictions seem to have been premature. People who have lost jobs in one occupation, due to automation, have been able to retrain to acquire jobs in new occupations. However, the closer that AI comes to AGI – the closer that artificial intelligence comes to possessing general capabilities in reasoning – the greater the credibility of the predictions of widespread unemployment and widespread underemployment. The closer that AI comes to AGI, the bigger the likely ensuing social disruption. Anticipating and managing this disruption will require significant changes to our social contract – the system by which people in society look after each other.

Even though we cannot be sure of the timescales, we can make the following prediction. As AI improves, it’s going to become increasingly hard for people who are displaced from one job by automation, to quickly acquire new skills that will allow them to carry out a different job that has no short-term threat of also being automated. Therefore, sooner or later, more and more people are going to find themselves unexpectedly out of work – or if not unemployed, underemployed. Without an adequate social safety net, their standard of living is set to fall. If we’re not careful, more and more people will experience a large blow to their self-esteem and self-confidence. There will be more and more alienation, emotional distress, and anger.

The prevailing mindset can be called “the primacy of paid employment”: unless someone undertakes paid employment, they are a substandard person, who should be reproached or scorned.

Of course, societies already make many exceptions to this concept. Basic pension payments are provided to all citizens, so long as they are old enough, without them needing to continue working. Basic educational funding is provided to all citizens, within certain age boundaries, even if they have not started paid work yet. Basic healthcare treatment is, this time with no age limits, provided free of charge to all citizens, whether or not they have paid employment. And when someone has lost their job, public funding is available, for a while at least, to help them as they look for a new job.

As another exception to the primacy of paid employment, family members frequently look after one another. Larger groups of mutual assistance “friendly societies” developed in many cultures around the world, in which resources were pooled, in order to assist members of the group who had special needs.

This spirit of mutual support should be applauded. Without a social safety net, a powerful spirit of apprehension can arise. The fear of becoming detached from the basic means of human flourishing can cause people to become narrow-minded, grasping, and self-centred. The fear of losing out generates resentment and bitterness. It drives people into a scarcity mentality, in which any gain by some members of society is seen as requiring others in society to suffer exploitation. Adverse effects follow, not only in personal wealth, but in personal health; not only in self-esteem, but in the quality of social relationships.

Whilst increasing numbers of people are finding themselves in precarious circumstances, the media bombards them with images of other people seemingly enjoying life as never before. For a highly visible subset of society, life appears to be full of marvellous material goods and mesmerising experiences. In contrast, for those impacted by technological underemployment, there’s a growing sense of unfairness and alienation. They perceive that the best opportunities of life are passing them by. They perceive themselves to be victims of how society is changing.

These sentiments render the populace all the more prone to being swayed by misleading theories about the causes of their predicament – theories that attribute their misfortune to scapegoats such as immigrants, rootless internationalists, modernists, multiculturalists, far-off bureaucrats, and so on. It’s time to take back control, they are told.

The sentiment is valid, but the courses of action recommended are frequently naive and dangerous.