An extract from Chapter 9 of the book Transcending Politics:

Transhumanists look at the human condition and proclaim: humanity deserves better. By taking advantage of the best insights and energies of present-day humanity, we can elevate humanity to a comprehensively better state. We can, and should, comprehensively improve our physical vitality, our mental acuity, our emotional wellbeing, and, yes, our economic relationships. In all these aspects, we can reach strikingly higher levels than at any time in human history (or prehistory).

This proclamation alarms a series of different kinds of critics.

First, it alarms religious fundamentalists, who believe that humanity is already the end point of divine creation. Any apparent flaws in the human condition – such as the physical blind spot in our eyes, our many cognitive biases, and our destructive tendencies towards tribalism and xenophobia – must be self-inflicted (they say), being the result of human sinfulness, in past or present-day generations. Or perhaps these flaws form part of some vast inscrutable divine plan, beyond human comprehension.

In response, transhumanists view these flaws as being, instead, unhappy consequences of our evolutionary heritage. Natural selection was limited in its foresight. Because of the incremental nature of biological evolution, there were many engineering solutions that lay outside its grasp. Because of the resulting shortcomings in human body and mind, the social structures that grew up over history had their own shortcomings, in turn causing further problems in the human experience. Transhumanists accept that there are many aspects of humanity that are “very good” – to use the description of the first humans placed into the divine mind by the authors of the opening chapter of the biblical book of Genesis. But there are many other aspects of the human condition that are capable of radical improvement, via intelligent design that can be carried out by far-sighted twenty-first century human engineers. When these improvements are in place, humans will become very good indeed.

Second, transhumanism alarms a group of critics who can be described as humanist fundamentalists. These critics abhor the transhumanist idea that technology can profoundly augment human consciousness and human character. Transhumanists anticipate humans reaching systematically better decisions, with the help of advanced computer algorithms, artificial intelligence, and enhanced mental states accessed via (among other means) increasingly smart drugs. Humanist critics fear that any solutions based on digital technology will be cold, unimaginative, and blinkered. A world that maximises efficiency, they warn, will be an inhuman one. These critics prefer the random whimsy and creative variability of the present-day human mind. Therefore they oppose the transhumanist project to use technology to improve the human mind. It won’t actually be an improvement, they say.

In response, transhumanists point out that digital technology can improve our creativity as well as our rationality. Rather than being limited to measures such as efficiency and productivity, new technology can augment our emotional responsiveness and spiritual capacity. As well as making us smarter, technology can make us kinder and more sensitive. Rather than dehumanising us, technology, used wisely, can humanise us more fully. Instead of most humans spending most of their lives in an impoverished mental state, the humans of the future can inhabit much higher planes of consciousness. But if we stick with our unaided mental capacity – as humanist fundamentalists would prefer – our quirkiness and (to use a candid term) stupidity will likely be the death of us. Humanity deserves better!

Third, consider a group of critics that I will call cultural fundamentalists. To them, when it comes to determining human capabilities, nurture is far more important than nature. If we want to improve human experience, we should prioritise changing human culture (the environment in which humans are nurtured). Let’s restrain advertising messages that encourage destructive consumerist tendencies. Let’s ensure popular soap operas have characters that demonstrate positive behaviour. Let’s avoid situations in which different people live side by side but receive very different rewards for roughly similar amounts of work, thereby stirring up feelings of alienation and resentment. Let’s improve lifelong education. Let’s arrange for everyone to be able to meet regularly with trained counsellors to talk through their underlying personal struggles, and to receive fulsome personal affirmation. Above all, let’s not focus on individual biological differences. To such critics, transhumanist interest in genetic influences on behaviour and personality is a retrograde step. Any idea of choosing the genetic makeup of your baby – or of editing your own genome – harks back to the discredited ideology of eugenics. These critics, therefore, regard transhumanists as being perhaps just one or two steps removed on a slippery slope from the dreadful biological experiments of the Nazi era.

In response, transhumanists say we have to consider both nurture and nature. It would be perverse to rule out improving our biological selves, via enhanced nutrition, dietary supplements, medicinal compounds, detox programmes, or (an extension of the same line of interventions) genetic reprogramming. Just because some past genetic experiments have been moral scandals, there’s no necessity to group all future genetic experiments under the same heading. After all, various past experiments to improve human culture went horribly wrong too – but that’s no reason to give up on the “improve culture” pathway. Similarly, there’s no good reason to give up on the “improve biology” pathway. It is by taking fully into account both the biological and cultural influences on human capabilities, that we will have the best opportunity to improve human experience. That’s what humanity deserves. 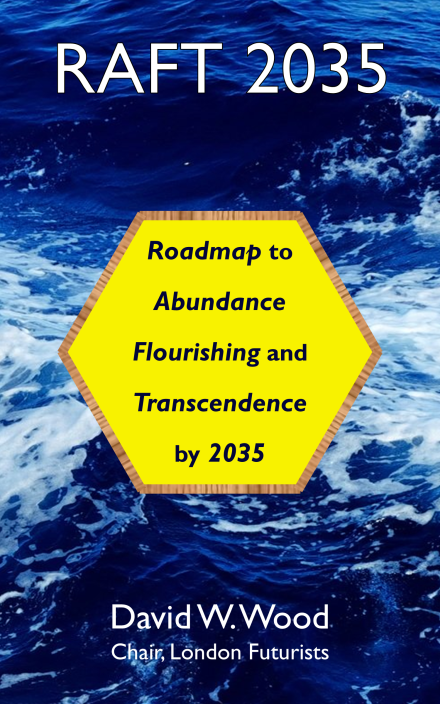