Two of the great political parties in the UK are in a state of shock this morning, in the wake of (for them) highly disappointing results in the General Election. 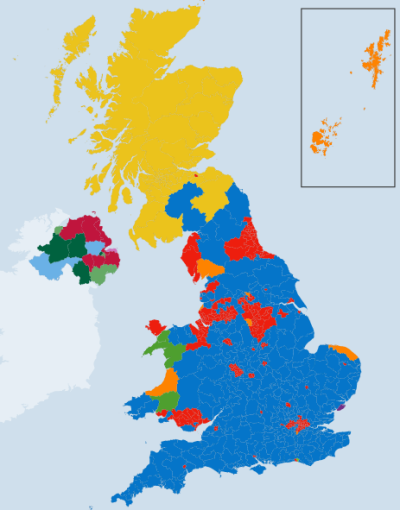 These parties are Labour (won constituencies shown in red in the map above) and the Liberal Democrats (orange).

Typical of the words I’m hearing from their supporters, on TV this morning, are “it’s been an absolutely dreadful night for us”.

No doubt these parties will be reconsidering their leadership. They may decide they need new faces to lead them.

But at the same time – and arguably more important – these parties will be considering potential major changes in their policies for the future.

It’s an opportunity for the politicians in these parties to recognise the issues of the future, and to bring them to the centre stage of their new policies. These are the issues which Transpolitica has been highlighting – issues such as the following:

I look forward to engaging conversation with forward-thinking politicians in all parties in the months and years ahead.

I say that, despite the fact that the UK’s two transhumanist candidates fared poorly in their own constituencies.

Alexander Karran, standing under an Independent banner in Liverpool Walton, came second bottom in that constituency, with 56 votes in his favour.

With Alex being unable to put the words “Transhumanist Party” after his name on the ballot paper (because it take several months for a new party to be formally registered in the UK), it’s not particularly surprising that most people in that constituency did not find a reason to vote for him. This result is a foundation for much better results in the future.

Darren Reynolds, standing as a Liberal Democratic in Bolton South East, fared better in absolute terms, with 1,072 votes, but suffered as part of a huge nationwide decline of -15.1% in the Liberal Democrat vote compared to the previous (2010) election.

In Bolton South East, the Liberal Democrat vote declined by 13.2%, which is less than the national average, showing (perhaps) some credit to Darren’s campaign.

For the 2015 election, transhumanist and technoprogressive topics hardly received any airtime in the public discussion. It will take some time to build up the necessary momentum. That work starts today.