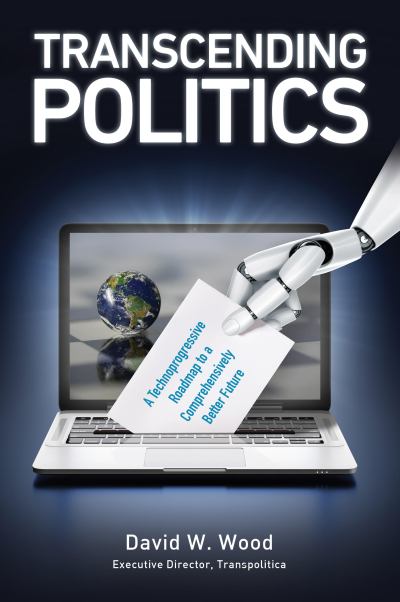 A new chapter of the forthcoming book “Transcending Politics” has been released for review comments by Transpolitica supporters.

The chapter is entitled “Exuberance and scarcity“. You can get an idea of the content covered by the list of its section headings:

Here’s how the chapter starts (in its current version):

Let’s set aside for the time being the subject of the previous chapter, namely the threat of an environmental meltdown triggered by reckless human activity. Instead, to start this chapter, let’s consider a different kind of meltdown, in which financial systems cease working around the world.

In such a scenario, ordinary citizens might try to withdraw cash from bank teller machines, sometime in the next few years, only to find they’ve all stopped working. The funds in savings accounts may be significantly reduced overnight. Payment requests using credit cards may be declined, causing chaos in shops and restaurants. In an atmosphere of profound uncertainty, corporations will avoid taking risks. Business contracts will be cancelled, with growing numbers of employees being made redundant. Supermarket shelves will become bare. Populist politicians and newspapers will be quick to blame bankers, businessmen, overseas cabals, the so-called “elites”, reds-under-the-bed, or whoever. Tempers everywhere will flare. Soon, people will be trying to take matters into their own hands. The few “survivalists” who have been able to hoard scarce resources will find their stashes under attack. It won’t be long until law and order breaks down.

That’s a possible disturbing future which has echoes in many past upheavals. History bears witness to a long series of financial crashes, each ugly in their own way. Simpler times saw simpler kinds of crashes, but the effects were still often catastrophic for the individuals involved.

In this chapter, I’ll explore the likely effect on future financial stability from the trend that underpins all the others discussed in this book, namely the acceleration of technological innovation. Should that acceleration make us more apprehensive about forthcoming financial crises? Or will it instead diminish the importance of money? Indeed, if economics is the study of the allocation of scarce resources, and accelerating technology delivers a sustainable abundance of all the basic necessities of life, where will that leave economics? Will the displacement of scarcity by abundance transform the so-called “dismal science” (economics) into an unnecessary science?

To give my answer in advance: that’s not going to happen any time soon, contrary to the apparent expectation of various techno-utopians. Technological innovation, by itself, isn’t going to free society from the risk of financial meltdowns. Instead, we’re going to need better politics: technoprogressive politics…

As with all the other chapters released so far, Google Doc copies of the latest version can be reached from this page on the Transpolitica website. Google Docs makes it easy for people to raise comments, suggest modifications to the text, and (for reviewers who log into a Google account) to see comments raised by other reviewers.

Comments are particularly welcome from reviewers where they point out mistakes, pieces of text where the meaning is unclear, or key considerations that seem to have been neglected.

Drafts of eight of the envisaged 13 chapters have now been completed. Over the month of August, it is hoped that at least one more chapter will be completed – and that the earlier chapters will be revised in the light of review comments that have already been received.